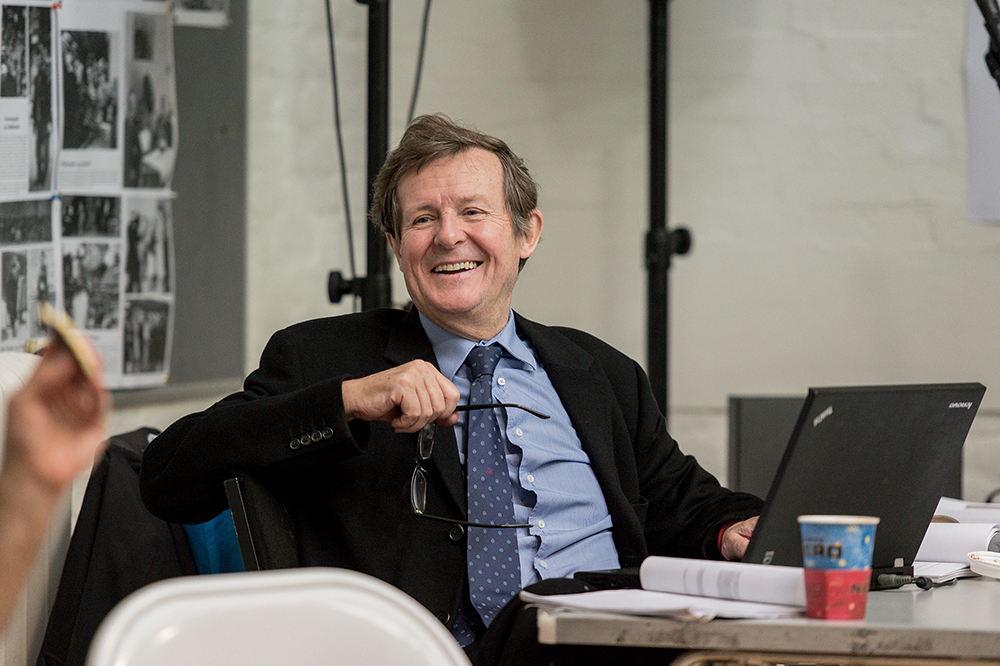 This interview is taken from The Master Builder Education Pack.

You can also listen to the recording of an Old Vic Voices Off event with David Hare here.

How do you approach adapting an existing play?

Ive always been very interested in Ibsen as a person. So when Ralph Fiennes asked me to do The Master Builder because he wanted to play the part of Halvard Solness, I read a couple of biographies and then asked someone to write a literal translation. I need a translation because I dont speak Norwegian, but I deliberately always say to the person who does it – dont try and make it readable at all, simply give me the meaning of every word. So the literal translation has a lot of footnotes that describe the nuance involved in every single word. The translator did take me literally and it was a fantastically difficult document to read. If you heard this translation played it would be absolutely unbearable to listen to.

Its an extremely challenging play, one whos meaning shifts all the time. There are at least three basic strands to it. One is the story of an architect whos threatened by the young. Secondly theres a young girl who arrives and talks about the past, and relates an incident which may or may not have happened. And then thirdly theres this huge subtext about his relationship with his wife, and the death of their children. By the time youve got all of these things playing its a very knotty language, a lot of which is almost incomprehensible, or very distinctive in the original Norwegian. So its a fantastically difficult play to adapt.

Whats the purpose of writing a new adaptation when they already exist in English?

Ibsen himself said that he wanted his plays, when they were translated, to be in the everyday language of the day. Because he wrote at the end of the 19th Century, he himself did not expect that any translation would ever become standard. His attitude was that every play needed to be updated for each new culture, each new language and each new audience. In this country Michael Meyer, who was a Norwegian speaker working in the mid 20th Century, is Ibsens most famous translator. Even he would admit that Ibsen never intended that any of the translations become standard, but that they would be constantly changed so that they would speak directly to the culture that theyre performed in.
Ibsen is an amazingly contemporary writer and considering he writes at the end of the 19th Century, his themes are very modern and he wants the communication of the play to be as direct as possible, and thats my job.

So did you have a modern audience in mind when you were adapting the play?

Oh yes, Ive got The Old Vic in January 2016. I dont know whether this adaptation will ever be done again, but its for here and now, this theatre, this time. And also this actor. Ralph Fiennes is an actor Ive worked with before, and know extremely well. I know the sound of Ralphs voice, and so when I was adapting it I was writing it to fit in his mouth. If you write film, then you do a lot of that. You go oh I know so and so is going to play this part and you fit the language up because you know it suits them, and suits their character.

To me Ralph is the great classical actor of the day, I dont think anybody comes near him in terms of relating directly to the tradition of Laurence Olivier, John Gielgud, Michael Redgrave. He brings back those kinds of actor, and so I tried to write for that stocky, virile, mainstream, sensitive leading man that Ralph is now the great modern example of.

How much of your own voice is present in the adaptation?

Its particularly difficult with the play because it is deliberately autobiographical. An awful lot of the play is Ibsen writing about his own life. As he grew older, first of all he did become sexually obsessed with young women, and secondly he did feel that the young were coming to take his reputation away. He almost deliberately draws attention to this in many places. He calls the master builder an artist at one point, which implies that he wants the parallel drawn between his own peculiar psychology and the characters peculiar psychology.

As far as Im concerned I want the audience to see Ibsen and I want to be a pane of glass, I dont want to get in the way at all. On the other hand, if they performed a translation which was written in the 1950s, that will get in the way because you will be conscious of the personality of someone from sixty years ago. The point of updating it is to get you as close to Ibsen as you possibly can. I havent tilted this play or made it thematically about anything except what I believe Ibsen wanted it to be about. Theres no me.

Is it helpful to read other peoples adaptations before you start writing yours?

No its very much not. I think that Michael Meyer, used to object to what he called floor jobs. What he meant by a floor job was that the director, usually, will have got hold of six adaptations, put them on the floor and said I like that line like that, and that line like that. As Michael Meyer said, it was an attack on his integrity, it was an attack on his profession and it was a misunderstanding of what adaptation is. I go to the theatre and Im aware of floor jobs, Im aware of bits that have been stolen from peoples translations and its really not good.

I deliberately dont read anyone elses work because if I read someone elses something really good may stick in my mind. Before I adapted The Seagull, I had the misfortune of having read Tom Stoppards adaptation a couple of years earlier. He calls Doctor Dorn an obstetrician which is a brilliant word for Doctor Dorn, and tells you completely what Dorn does but its not Chekhovs word. It stuck in my mind and I couldnt get it out of my mind because Id seen Stoppards version, and I did steal it Im afraid. I did put obstetrician because its just so perfect. But you dont want to be influenced by other people.

Does the draft you write change during rehearsals?

First there was a draft which we read with Ralph. So even before The Old Vic and Matthew Warchus arrived, Ralph and I had a reading in my office with a group of actors together, and the minute I heard that I instantly make a whole load of changes. But I think the way that Matthew has investigated the play, has been through investigating the adaptation. So yes, there have been a huge number of questions, partly because the play is very obscure in certain places. Ive had to say yes, that is exactly what Ibsen wanted that line to be. But I have made changes where the actors have come upon things that made me feel that I hadnt adapted it right.

Ibsen is considered to be ahead of his time in terms of social issues such as the role of women. Do you think he was a feminist?

Well he denied he was a feminist, and Chekov denied he was a feminist, but they both just happened to be writing these brilliant roles for women. So, the answer is hes a humanist. Hes a complicated figure, because he started out writing poetic drama. He then moved away from poetic drama and into realistic social drama. By the time you get to The Master Builder hes moving back towards the poetic again, but at a sort of half way point where the play is almost realistic but its also heavily symbolist and expressionist. Its a very rich mix of all the different influences in his life. Was he bang up to date for his time, undoubtedly. Is he still bang up to date today? Undoubtedly.

Do you think adaptation a good way to get into writing?

I always thought not. The only thing I wanted to do when I was a young writer was find my own voice. And that took me ten years really, to write a play that I was pleased with and which I felt was mine and nobody elses. I think adaptation for me at least, has become a sign of my confidence about my own voice. Im perfectly happy to stand second in line to Chekhov, or Ibsen, or Schnitzler, or Pirandello, or Brecht, or Gorky, because I dont have any complex about my own voice, because Ive written my own plays. So for me its the pleasure of a garage mechanic I love taking these plays apart and seeing how other people do them.

With Ibsen theres an incredible structural discipline, and what looks odd on the page often works absolutely brilliantly. In the third act before the climax of the play, the master builder has a big scene, then he goes out, then three minutes later he comes back and he has another scene, and then he goes out again. Ralph and I both thought, this is structurally very odd. And yet the minute we played it the other day, it had an incredible drum beat of tragedy. Ibsen has an iron control over people leaving and entering, and the rhythm moving towards a tragic climax. And yet on the page you cant always see it, but the minute you act it you can really feel it. Thats the sign of a really great writer.

What is your advice to young people interested in pursuing writing as a career?

The advice that I give to everybody is try it, write a play and put it on yourself. Get your friends to do it, or do it yourself. So many great playwrights have been naives. Shelagh Delaney was just a seventeen year old school girl who went to a theatre and thought I can do better than this. Andrea Dunbar was a girl on a council estate who scribbled out these wonderful scenes in a notebook. Until you do it and stick the play on yourself youll never learn.

That is the only good advice, because I didnt know I could write until I wrote. And I only wrote because I had to, not because I wanted to. Then I discovered I had this talent for it, but I had no inkling that I had the talent until I tried it. Its like swimming a hundred yards or pole vaulting, its worth doing it once just to see if youre any good at it. If you discover youre no good at it, forget it. But youve lost nothing, youve only been humiliated once!