Voices Off talk: Lear and Daughters 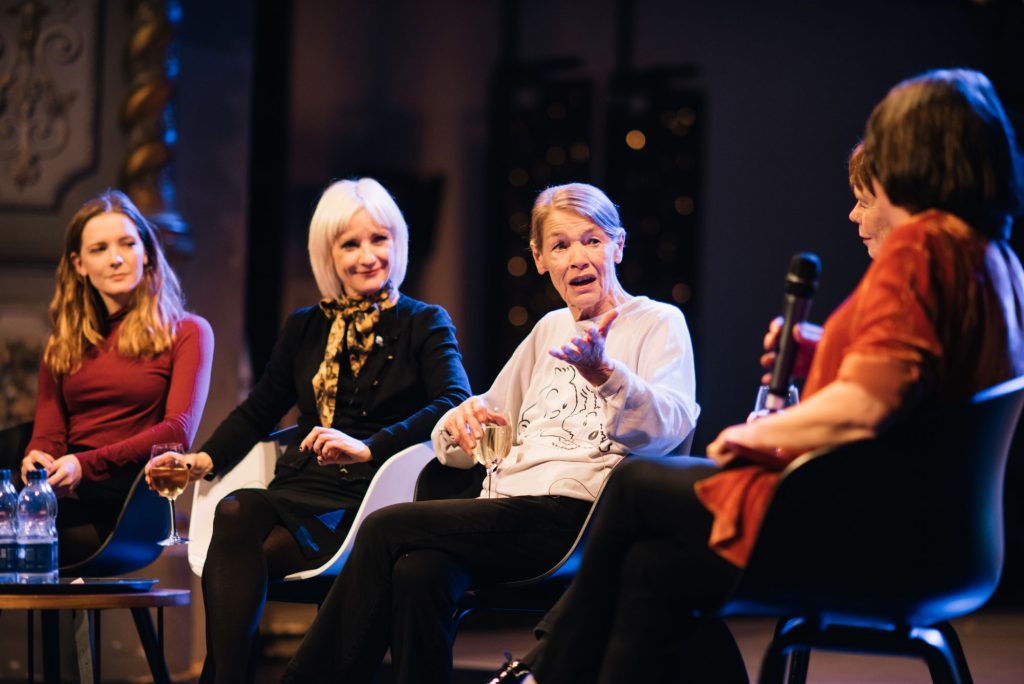 This is a transcript of the Voices Off event on 25 November with Glenda Jackson (King Lear), Morfydd Clark (Cordelia), Jane Horrocks (Regan) and Celia Imrie (Goneril), chaired by Sarah Crompton.

Sarah Crompton: Hello and welcome to this Voices Off talk for King Lear. Were very lucky to be joined by the three daughters Celia Imrie, Jane Horrocks and Morfydd Clark. Glenda Jackson will join in a few minutes. Jane, lets start with you. It strikes me, and I think Deborah Warner the director said this, that the important thing about having Glenda Jackson playing Lear is not her gender but her age and that does sort of slightly influence the portrayal of the daughters. And I wondered how it had affected your playing?
Jane Horrocks: It is incredible, I mean, as Celia said, we stand in awe really, that any eighty-year-old that can do that is pretty incredible, so I think Im just awestruck by it. And regarding the gender, Ive never questioned that: even from day one, I didnt ever think, Oh its a woman playing Lear, Ive always just accepted that shes a guy and I think Glenda just convinces you that actually shes neither one nor the other, shes kind of like this asexual being that could be a guy and that is, again, in itself, a brilliant thing to be able to pull off. So yes, shes a marvel all round.
SC: And does it make Regan a more sympathetic character, in some ways, that she is dealing with an older father?
JH: I think she sometimes takes a sympathetic approach, but I think the underlying feeling is she wants to get what she wants and shell use any tactic to get round her. I think shes wily, is Regan, and thats interesting that she picks up on Lears age all the time, and thats quite interesting actually that shes brave enough to touch on that and to say that actually, Youre approaching senility and youd better watch out. Theyre interesting lines that Regan has got and she is brave, actually, with Lear.
SC: And Morfydd, Cordelia is quite different as well in your interpretation: shes much bolder than normal. How did that arise?
Morfydd Clark: Thinking about why Lear loves Cordelia so much, what I decided on is that it’s because they are quite similar, so really I just watched Glenda and tried to take little bits of Glenda to make Cordelia a little bit more feisty than she might be sometimes.
SC: And did you feel, being slightly less experienced, did you feel at all overawed coming into the rehearsal room with all of these people?
MC: I did absolutely, up to the first day, but then I came in and everyone was so kind and lovely. I think because its such a huge cast, you felt so protected by just having this big cushion of wonderful actors around you, so its quite the opposite once you were on the job because I just felt so secure being with all these people whove done so much.
SC: And Celia what was it like in the rehearsal room? Where did you start the play?
Celia Imrie: It was a nightmare! We rehearsed, believe it or not, for longer than we are going to play, which is rather peculiar. But were a company of real weirdoes actually, were not quite the number you would first think of for any of the parts, which I think is thrilling. Were not, and Ill probably get struck down for this, were probably not what you might imagine the Royal Shakespeare Company might present to you, because were all a bit strange, but I think that makes it…
JH: Speak for yourself!