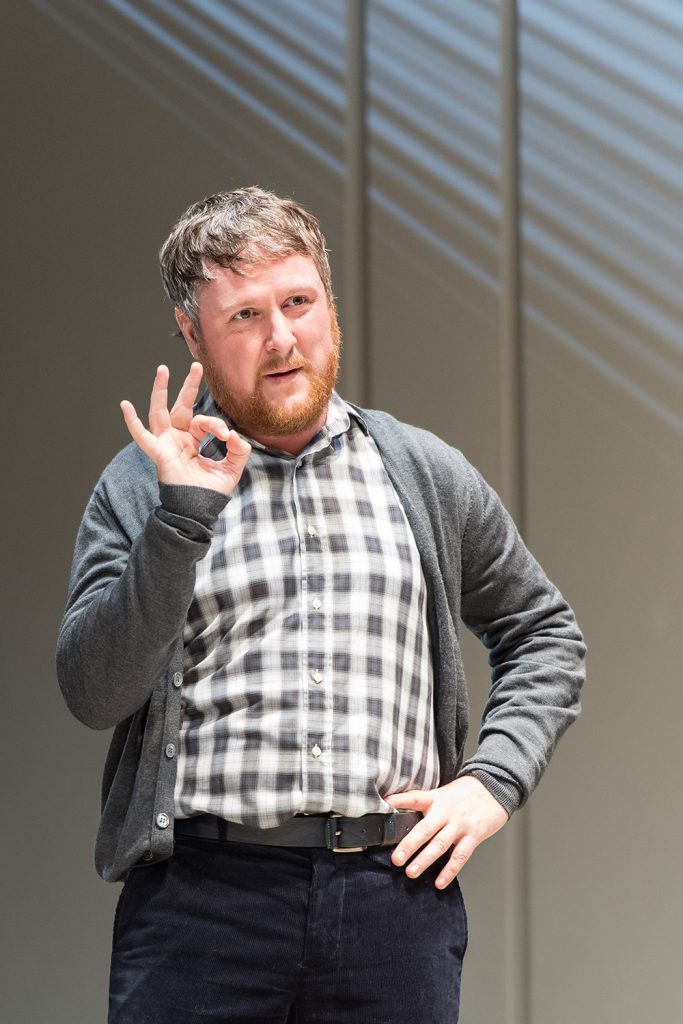 Currently performing in ‘Art’, we grabbed a few minutes to chat to Tim Key about rehearsals, his role, and that monologue.

As an actor, what’s the most exciting thing for you about ‘Art’?
I guess they do say it’s good to do things that are scary and challenging and frightening and ‘Art’ definitely is that, for me anyway. There’s a pressure because the writing’s so good so you want to make sure you’re delivering it right. And there’s a pressure because there’s an enormous monologue which falls to Ivan to deliver. So all these things make it difficult and then when you feel it all working there’s definitely excitement mixed in with the relief.

What has the rehearsal process been like?
Interesting. It’s such a great play on the page so it’s interesting working it through in a rehearsal room. Seeing things emerge you hadn’t seen whilst reading it. I hadn’t expected it to become SO brutal. It felt brutal reading it but not this brutal! But as we rehearsed it, it became more and more grim. And not a lot of laughter. It wasn’t until we did it in front of an audience that it started to transform into a comedy. Or at least comedy started to infiltrate the tragedy.

What are the particular challenges of your role in this play?
The monologue’s a handful. Manoeuvring from being terrified at the prospect to exhilarated has been an interesting process. A challenge.

Can you tell us a bit about your character, and the process of discovering this?
I’ve found Yvan becomes more upset with his lot as the run has gone on. There’s a lot of stuff misfiring in his life and a lot of stuff that’s falling apart in the weeks where we find him. And during the play lots of things come tumbling down. Now I feel I’m playing him a little more desolate. He still tries to remain optimistic, he still manages to jerk his way out of bleakness for the odd moment, but really he’s in a world of trouble. Not very nice.

Can you describe a moment in the play that has particularly evolved for you over the rehearsal period and how it has developed?
Weirdly it’s the opening three or four scenes that are subtly shifting right now, they ones before things really KICK OFF. But they’re important in establishing the friendships that will later be demolished so they’re crucial to get right. And I think we’re increasingly making them warmer, and there’s little moments of joy and brightness in the first twenty minutes of the play that are very useful. I’m enjoying these moments with Rufus and Paul, before the whole thing falls completely and utterly apart…

This interview is taken from the Education Pack for ‘Art’.