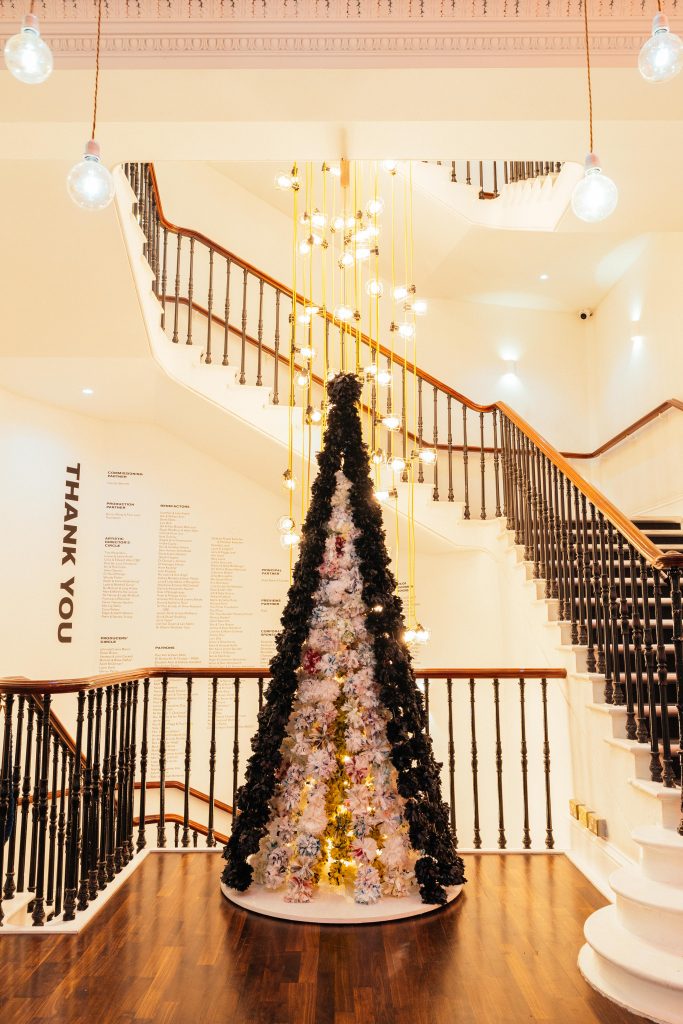 Our concept began with inspiration from the tale A Christmas Carol. More specifically the character of Scrooge and his transformation of bad to good. To mirror this transformation we designed our tree with three layers; a dark exterior, a lighter middle and a bright yellow inside layer to represent the goodness deep within his character. There would be a gap at the front and the back for people to see through the layers.

We wanted our tree to tell a story and to represent the wonderful moral to A Christmas Carol.

As for the materials, we first thought of plastic bottles or perhaps discarded scarves because we wanted to use environmentally friendly or reused materials. We came up with the idea of using plastic bags – which we discovered is a material that isn’t biodegradable and is so often wasted. But to make roughly 500 pom poms, it required a lot of effort to collect a bunch of recycled bags. Once we had collected them all, we then found that it is quite easy to make the pom poms out of strips we cut from the plastic bags.

A pom pom the same size as an orange can be made of one plastic bin bag. The process is simple but it takes pretty long time. First we cut long strips from the bag, assembled it together and then trimmed it. I don’t think we realised how many we would actually have to make and how long that would take… once we realised we recruited our friends to our pom pom factory. With many of our friends help, we slowly but successfully managed to make over 500 pom poms.

The making of the structure of our tree was quite challenging. The plan we settled on was to create a bracket to fit around the bannister of the stairs which meant that we had to take accurate measurements to ensure it was secure. The bracket created a holding point for all the weight of the tree meaning it had to made of a strong material. We decided to use several layers of plywood for this. We drew up the design in adobe illustrator and then imported it to ‘Solidworks’. Using this data, the CNC machine cut out the bracket. Once installed around the bannister, we used cable ties to ensure it was stable and secure.

The other element that was essential to our structure was the base, which was a large circle with holes in carefully measured spots for us to tie the strings through. It was difficult to ensure every hole was the correct distance from the centre which we drew up in adobe illustrator. Similar to the bracket, we converted the file and had it cut accurately using the CNC machine. We also added a groove underneath deep enough for a wire incase we had time to add a light fixture in the middle to brighten the inside of our tree.

The day before the install we had to string up all of our pom poms onto lengths of the strongest fishing wire we could find. We used a slip knot to tie a loop onto the top of each string. These loops would be incredibly important for attaching the strings to the centre rope during installation. It was unbelievably tricky tying knots in the fishing wire because they would just bounce back if they weren’t tied tight enough, but we got the hang of it eventually.

The black pom pom layer was the first attached to the centre line and we then attached each of the black pom pom wires in an order. During the process of attaching each layer of pom poms to the centre line, we had to write numbers and either A or B so we wouldn’t get confused. This was because each line had alternating numbers of pom poms so they wouldn’t get too bunched up at the top. We realised that we needed this numbering system while we were installing the pom pom tree. We also added the biggest black pom pom on the top of the tree quite last minute to make the tree look nicer and more rounded on the top. We used four big bin bags to make this one!

Installing the white pom poms (second layer) and yellow pom poms (third layer) followed the same process. Again, it was just a case of ensuring that all the lines were tight enough and that there weren’t any big gaps at the bottom.

The final stage of the construction involved a very complex tying system beneath the base of our tree in an attempt to get the strings tighter and make the pom poms look less clumped together. This tying system worked perfectly to fix our problem – although we had expected there to be more space between each coloured layer. We then began on the finishing touches, giving haircuts to some of the pom poms, filling gaps, and making sure each pom pom was evenly spaced. Then (finally) it was finished!

‘Working on the Christmas Tree for the Old Vic has been an extraordinary experience, it has challenged me to approach a project in a completely different way to anything I have ever worked on before. There was a lot more technical thinking and mathematics involved than I would have liked, but I have learnt some valuable lessons on what it’s like to work on a live project that goes  beyond designing something on paper. I am lucky to have worked on something so important and am very grateful for the opportunity’

‘This Old Vic brief has been the biggest technical challenge I’ve done in a while, the issues we faced along the way taught me that I have hidden talents such as being an expert at slip knots. It’s been a valuable group experience as its given me more confidence with decision making and social skills. I’m thankful to have worked on such a project and am grateful to The Old Vic for the opportunity’