The American Clock: An interview with cast members Jyuddah Jaymes and Taheen Modak 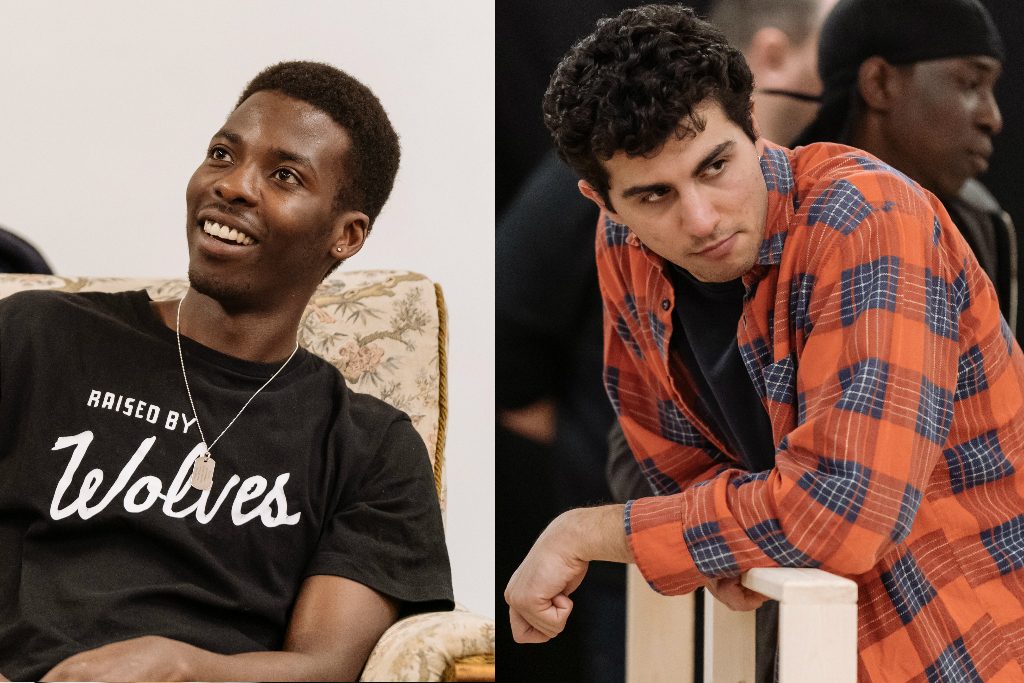 We spoke to two of the actors who are playing the character of Rose and Moe’s son, Lee.

You both play the role of Lee Baum at different times in the play. What are your thoughts about playing him?

There are three of us playing the role and Lee starts the play as a child and ends it as a young man. We wanted to depict this character who is savvy, and who sees what is going on in the world around him. Although the faces change with the three versions of the Baum family, the story doesn’t. Most importantly, we want the audience to see Lee and his family and be able to relate to elements of the scenario that they find themselves in. The casting of the family, and the three different versions, has been key to this. Families can look different but underneath the skin colour hopefully our audiences can identify elements of their own family, or other families that they know and find that connection. Lee is that kid who watches the world disintegrate around him and then has to adapt to it. He’s a creature of circumstance and he has to take whatever action needed in order to survive.

Can you talk us through the process of creating a character like Lee, particularly as the audience need to understand that he’s being played by different people?

When you create a character you start from a neutral place and then you start to think about things like the tics, the gestures and speech patterns and the accents. Little by little you’re building layers and eventually you’ve created a whole person! As the rehearsal process goes on, we’ll look closely at our different interpretations and make sure that that clarity is there for the audience.

What about the relationship between Lee and his mother, Rose?

It’s a really interesting and important relationship. There’s that line in the script that has really stood out to us: ‘After all these years, I can’t settle myself about my mother’. It’s such a beautiful line that encapsulates so much about their relationship. It contains all of those moments that the audience doesn’t see within the action of the play, the moments where Lee is trying to prevent Rose feeling guilty about his struggles to get to university, and to minimise her distress. Again, Miller is writing about the mother-son relationship because it’s an important relationship for any boy. It’s interesting to read the play considering the fact that there are very few female influences in it, but the presence of the mother is very important. Lee’s father is interesting to explore too — for Lee he’s that superhero who can fix anything and supply anything but that’s suddenly taken away: Rose and Lee have to help pick up the pieces. With the three versions of Lee, we can identify him as three different stages of his life. Lee #1 is learning as he goes along, like any child does, but Lee #2 starts discovering the harsh realities of life. Lee #3 then shows a depth of understanding that has developed throughout all of these stages. The American Clock has a lot of autobiographical moments and Arthur Miller admired his own mother immensely. She had taught Arthur’s father English (his father was born in Galicia, which now forms part of Poland). The family lived very comfortably until 1929 when they lost almost everything (including a summer house and the employment of their own chauffeur) and had to move to Brooklyn.

There are quite a few productions of Arthur Miller’s plays coming up in London this year. Why do you think he remains to popular?

His work is timeless. He writes about family, and the state of relationships and about what it is to be human, so it’s always going to be relevant. As an actor, working with Miller’s words is great because he gives us everything that we need — you look at what he’s written and you can just run with it without having to ask too many questions. In terms of The American Clock, Miller is dealing with a big historical event — the Crash and the Great Depression, but what makes it relevant is that he doesn’t just deal with the big names or corporations. He shows us the man who has to go home to his family, who has to put food on the table rather than just looking at the wealthy stockbrokers.

Can you describe the rehearsal process for the show?

We start around the table, with a read through. It’s an important part of the process because you need to understand the scene: what’s happening in it and what the scene is doing — what it reveals. Once you’ve worked that out, and the rhythm or beats of the scene, you can get it on its feet. Rachel (Chavkin — the director of The American Clock) is not prescriptive — it’s a collaborative process. Rachel mediates and facilitates and that’s particularly helpful when you suddenly get stuck on a line or a moment. It’s also a very experienced cast so even if we have lots of questions about a moment or an element of the play, we can always come up with an answer that works.

Movement is very important in this production of The American Clock. What can you tell us about what we can expect?

Movement plays a very significant role. Justin (Ellington — the composer for the show) has talked a lot about how even though the time of the Great Depression was a very dark and difficult time, it actually produced some of the liveliest and optimistic music. Some of the scenes include movement which encapsulates what’s happening in the scene, and we’ve been encouraged to use our own body’s natural capability and make the movement our own.

It’s been interesting to learn about the Dance marathons that took place during this period — a real endurance test which was entertaining, but more importantly was often people’s way of trying to earn a living. Some of these events went for weeks at a time and encapsulates the endurance and desperation that everyone felt during this time. People went to extraordinary lengths to win — ice baths for the men and smelling salts for the women were used because they were only getting two hours of sleep a night during the competition! Sadly, some event organisers skipped town before awarding the prize money, so some people went to those terrible lengths and ended up not being paid after all. Just like the energetic dancing of the time tried to cover up the difficulties of the time, The American Clock is described as vaudeville for exactly the same reason — an attempted lightness during a very dark time.

The American Clock is playing 4 Feb – 30 March. Find out more.