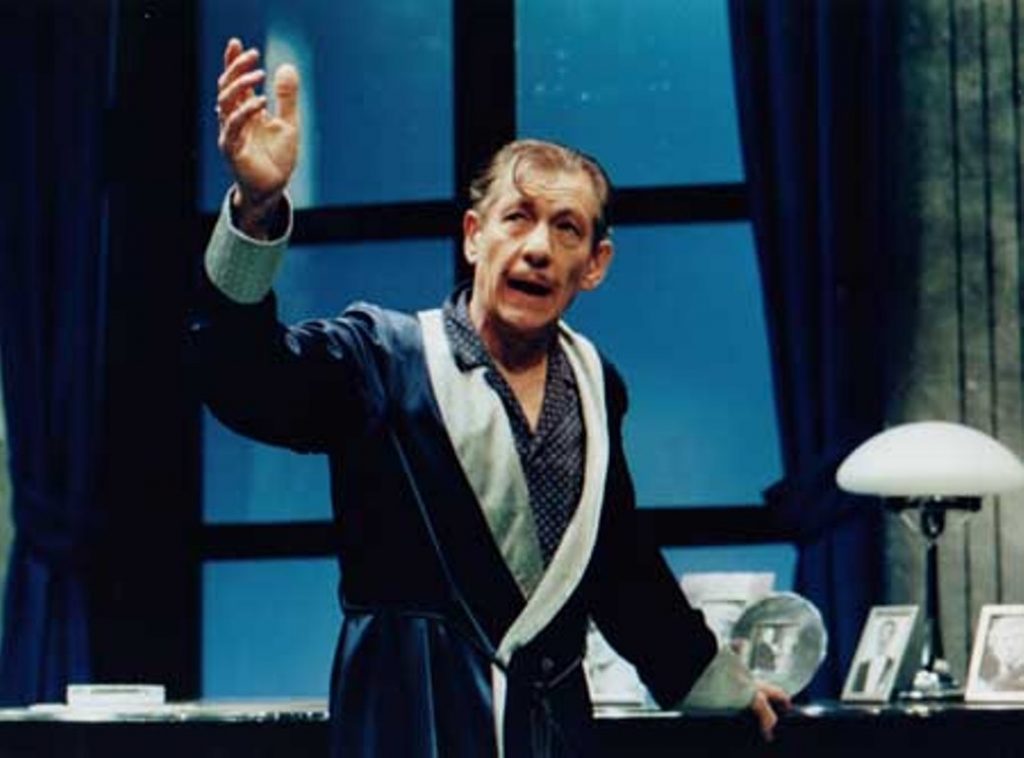 ‘Garry Essendine is a starring role, a matinee idol obsessed with his receding hairline, and once I had conquered the lines I relaxed enough to throw them up like a juggler, catching most of them with the necessary panache’ Ian McKellen

Noël Coward’s Present Laughter lets us in on just a few days of Garry Essendine’s life. A highly successful actor going through something of a midlife crisis, Garry is about to embark on a tour of Africa but his preparations are interrupted by a steady stream of friends, admirers and lovers – all posing a threat to his carefully curated lifestyle.

It was no secret that Coward based the character on himself – ‘a potent mixture of self-exposure and self-celebration’ – and Coward himself took up the role when the show premiered in 1942. With Andrew Scott (Fleabag, Sherlock) playing Garry at The Old Vic this summer, we’ve had a look back at some of the actors who’ve been on our stage and have taken on the part over the years.

JOHN GIELGUD
played Garry Essendine in a 1956 BBC radio production
… But it was over 30 years earlier that John Gielgud made his acting debut at The Old Vic and went on to establish himself here as an exponent of Shakespeare. In 1929, he was invited to join the company for the forthcoming season, during which he honed his skills as a Shakespearean actor and was highly praised by critics.

ALBERT FINNEY
played Garry Essendine 1977 at the Royal Exchange Manchester
Did you know it was our stage on which Albert Finney made his London stage debut in 1956? He performed in Caesar and Cleopatra in 1956 and went on to perform Shakespeare and Chekhov here in the 1960s.

Speaking of his performance in Present Laughter, The Guardian described him as ‘an ultra-credible woman-slaying Gary Essendine’.

PETER O’TOOLE
played Garry Essendine in 1978 at Goodman Theatre, Chicago
Like Garry himself, Peter O’Toole wasn’t one to play by the rules. In 1963, the National Theatre was housed at The Old Vic and the very first performance was Hamlet directed by Laurence Olivier and with rising star Peter O’Toole as the lead. O’Toole famously disregarded Olivier’s direction on the opening night: ‘It was tragic actually. If O’Toole had given on the first night the performance he gave on the last dress rehearsal it would have been an absolute sensation.’ Laurence Olivier

IAN MCKELLEN
played Garry Essendine from 1998-1999 at Leeds Playhouse
Ian McKellen took well to the part of Garry, despite feeling conscious that he was 20 years older than Noël Coward had been when he played the part. ‘McKellen delivers a performance of hilariously combustible energy and unpredictable comic timing’ The Independent, 1998

Ian McKellen performed alongside Maggie Smith at The Old Vic in Much Ado About Nothing, 1965, returning in 2004 for a very different role as Widow Twankey in Aladdin. Earlier this year, we were delighted to welcome him back as part of his 80th Birthday tour Ian McKellen On Stage.

ANDREW SCOTT
playing Garry Essendine from Jun – Aug 2019 at The Old Vic
Present Laughter won’t be Andrew Scott’s first time in a Noël Coward play on The Old Vic stage – he played Leo in Coward’s dark romantic comedy Design for Living back in 2010. More recently he was at The Old Vic in 2018 to perform in Simon Stephens’ devastating monologue Sea Wall.

Did you know that Present Laughter will be directed by Matthew Warchus, The Old Vic’s Artistic Director and that he also directed the 2014 film Pride starring Andrew Scott?

As we look forward to having Andrew Scott back on our stage in the role of Garry Essendine this summer, we wanted to know how he sees the character that’s been performed by so many accomplished actors over the last 77 years.