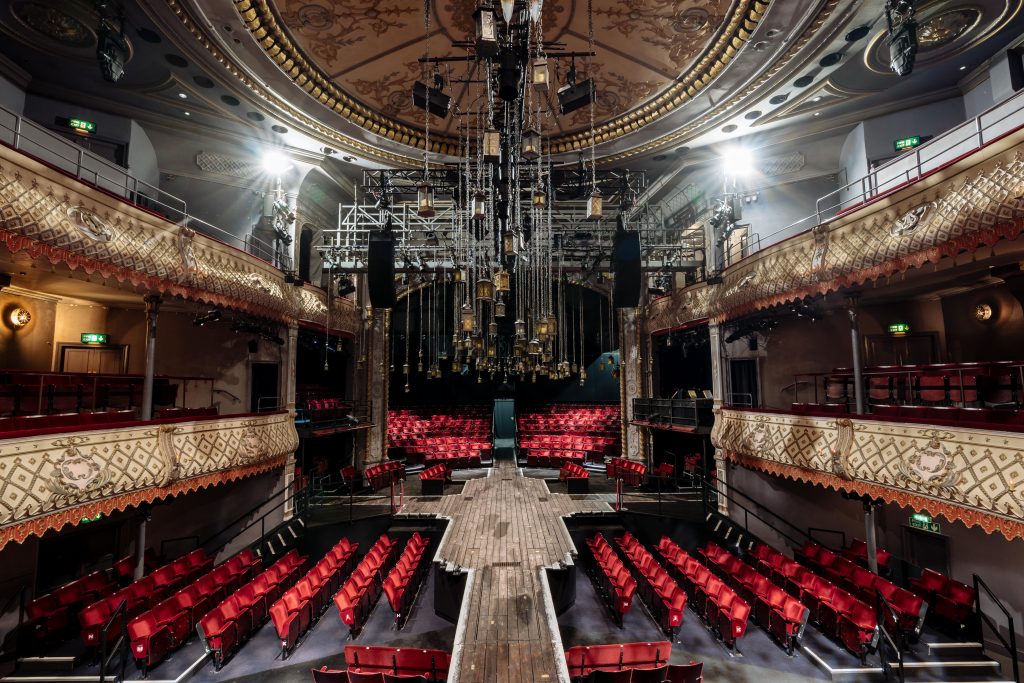 How do you make a Christmas cracker? You might think that a cherished Dickensian favourite would be a guaranteed festive hit. Yet when they first set out, in 2017, to tackle a tale as traditional as roast turkey, director Matthew Warchus and designer Rob Howell weren’t at all sure how they’d go about it. The challenge, Howell explains, was to find an approach that embraced the story’s enduring magic, while dodging all the twee, tinselly clichés.

‘We both wanted to do it, but the truth is that we could only imagine a production that we ourselves wouldn’t want to go and see,’ Howell tells me. ‘You know, shop windows, a revolving stage, cobbled streets — we just didn’t want that. We had to try to find another way that would be somehow fresh.’ The solution? ‘Satsumas and mince pies!’ Warchus had in mind a production that would celebrate community, with the sharing of seasonal treats and the polyphonous ringing of handbells connecting audience and actors. ‘And that’s how we found our way into it,’ says Howell. ‘It meant that suddenly it was about being intimate with the audience, not just presenting pretty pictures. It all started to open up.’

The result, of course, is a triumphant staging of the classic, now back at The Old Vic for the third year running; Howell describes an organic, fluid creative process between himself and Warchus, who are regular collaborators. ‘The thing I most cherish about all the shows I’ve worked on with Matthew — he’s my best friend, I’ve known him for 30 years — is that I genuinely don’t really know who had what idea. I don’t sit in my studio, call him, and then reveal something I’ve made.’ Instead, possibilities are discussed, allowed to percolate and experimented with — which is how the creative team came up with the production’s poetic use of light.

A thicket of glowing lanterns hangs above the actors’ heads, flickering spookily or swinging like the pendulums of clocks beating out the precious minutes Scrooge has left. Hugh Vanstone’s lighting design sets faces spectrally agleam in the gloom. Light licks like hellfire at the wooden walkway beneath Ebenezer’s feet, and his redemption is flooded with golden illumination.

‘The essence of the story is that it’s about a man who’s trapped, who has no light in his life,’ explains Howell. ‘And then the ghosts bring him light, he accepts it, and he’s freed. So the lanterns generate light, but they also act as a cage. Those were the two motifs for me — Scrooge is trapped in his room, in a cage, until the light becomes a spiritual force.’

The costumes — swishy capes, battered bonnets and top hats — have a worn-in aesthetic, rather than the immaculate plushness of typical period dramas, which adds flavour and dimension to the storytelling. In London, this was originally achieved with help from the vast costume stores at Bermondsey’s Sands Films: the characterful, meticulously preserved garments had made previous appearances on numerous stages and film sets, so that they had ‘already had a life’. On Broadway, where the show opened for the first time on 07 November this year, they’re being made from scratch, and then distressed by ‘a whole department of people with cheese-graters and sandpaper’. 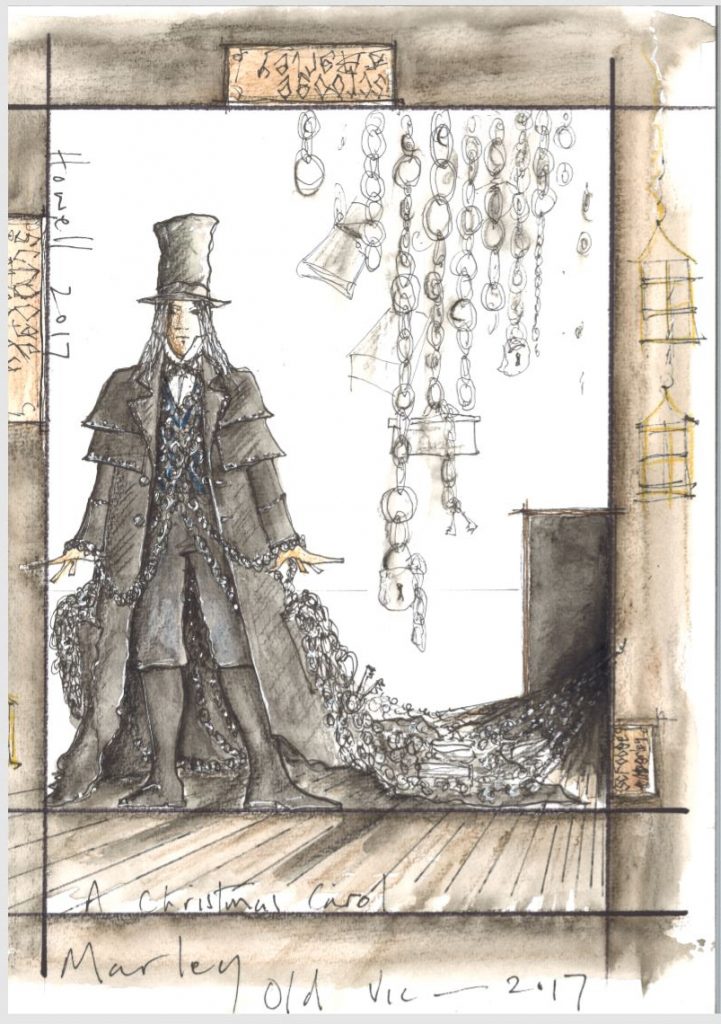 The toughest job, Howell tells me, was coming up with a style for the famous ghosts. ‘I arrived at it terrifyingly late,’ he admits. ‘Honestly, we were in maybe week three of rehearsals, and my costume associate said, “What are you going to do about the ghosts? You haven’t drawn anything, we’re nowhere.” I didn’t know what to do for a long time, and I can tell you that’s a pretty lonely place to be.’ All he was certain of was that he didn’t want to slavishly adhere to Dickens’ descriptions, ‘and that wasn’t just me being annoyingly perverse — I wanted to try to find a way that would stitch them into our version of Scrooge’s story.’ Inspiration came, at the eleventh hour, from the patchwork scarf that Ebenezer’s beloved sister Fan gives him as a Christmas gift. ‘The scarf is made of the same fabric as the ghosts’ costumes. They have a sort of cobbled together, intricate, layered look to them that is part of Scrooge’s personal history.’

It’s nerve-wracking, says Howell, to be facing a deadline and still figuring out the way forward, and sometimes it’s necessary to throw away several good ideas in order to find a single great one. ‘But that’s the process. You have to be brave enough to say, I’ve snatched at this, I’ve grabbed it, and people around me were about to make it work, but it’s not got the heart that it needs. So let’s start again. It’s a journey — we know where we’re going, but we don’t always know the route.  And that can be scary. But that’s also the joy of it.’

Sam Marlowe is a theatre critic.

A Christmas Carol is now playing at The Old Vic until Sat 18 Jan 2020.