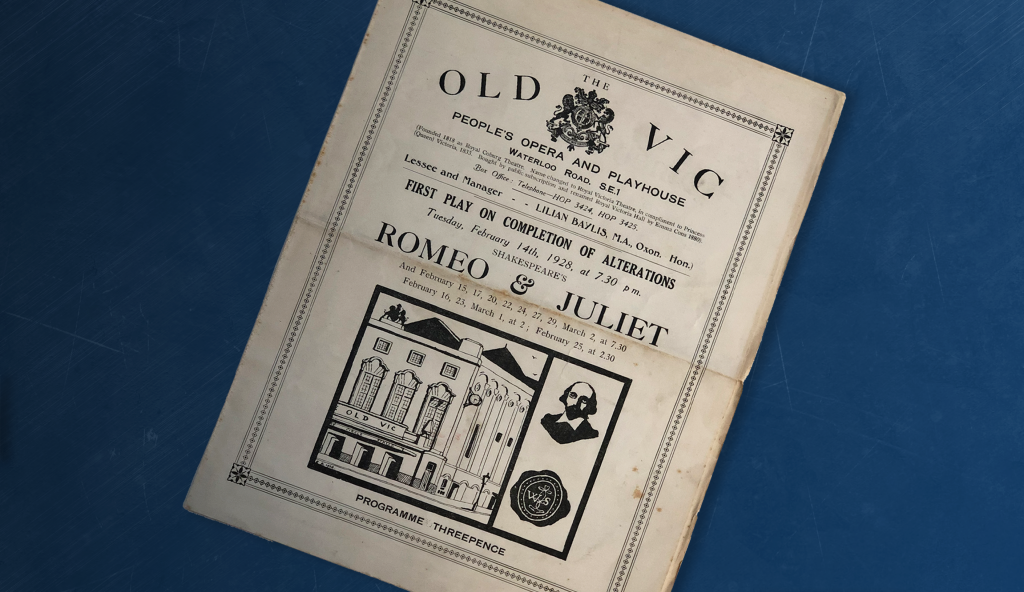 ‘You are a lover. Borrow Cupid’s wings and soar with them above common ground’

On this day in 1928, The Old Vic Shakespeare company were getting ready for their Valentine’s Day performance of Romeo & Juliet.

It was the first play to be performed on The Old Vic stage following nine months of building works (sound familiar?). Lilian Baylis had been planning to make a few simple improvements to the auditorium – it was still lit by gas, there weren’t enough exits and there was only one loo for everyone in the Stalls and Boxes. When the work began, the fabric was found to be crumbling and much of the façade had to be rebuilt, leaving the company homeless for nine months during which they migrated to Hammersmith until they could return.

Romeo & Juliet was produced by Andrew Leigh, who had been appointed the new Drama Producer in 1925. Leigh introduced leading West End actors in to lead the company, something that had never been done before.

The dance in the show was arranged by Ninette de Valois. A year earlier, the young Ninette de Valois approached Lilian Baylis and she was taken on at £1 a week to teach the actresses of the company ‘how to move’. She would also be paid £2 for arranging the choreography of any dance sequence needed for the Shakespeare repertory.

Juliet was played by Jean Forbes-Robertson, a versatile Shakespearean actress who appeared at The Old Vic for a whole season of Andrew Leigh’s plays, including Hamlet, The School for Scandal, King Lear, The Merchant of Venice, and Everyman. St John Ervine in the Observer wrote that he had ‘never witnessed anything so beautiful as Miss Forbes-Robertson’s performance’ as the heroine of Romeo & Juliet.

Eric Harold Portman played the part of Romeo. Having only made his professional stage debut a few years earlier in 1924, Portman was engaged by Lilian Baylis for the company to play Romeo at the rebuilt theatre, and he went on to become a successful theatre and film actor.

With special thanks to David Harrold, who kindly gave us the pictured Romeo & Juliet programme from 1928.