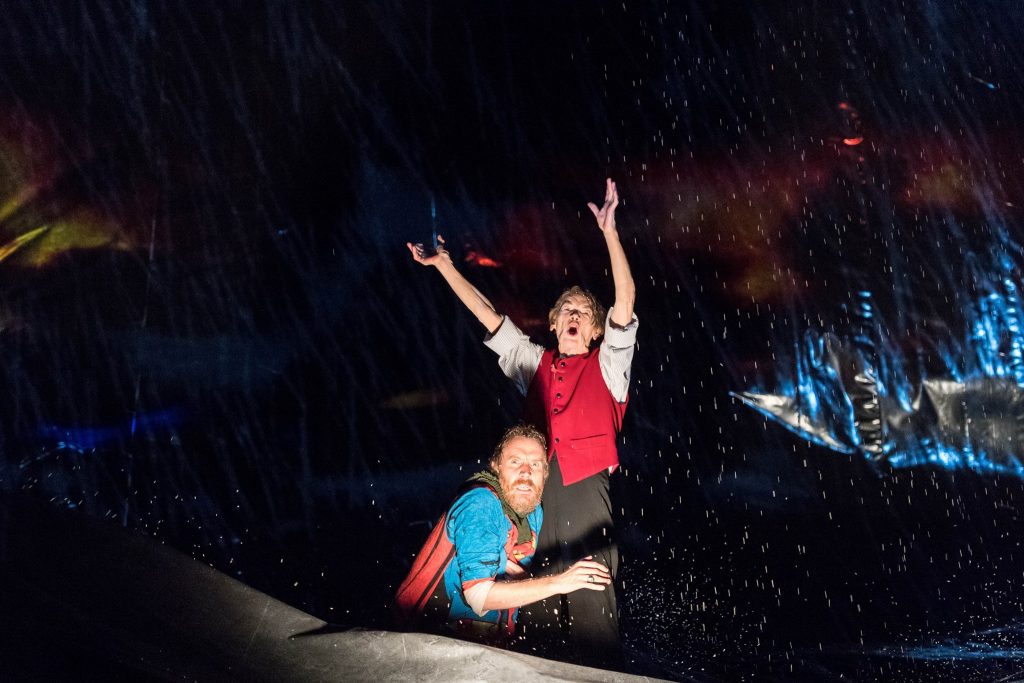 I don’t remember from this distance how I first came to know about Schools Club. Maybe a recommendation from a fellow drama teacher? Perhaps I was having a wander around The Old Vic’s website? Or did I get a random and fortuitous email from The Old Vic themselves? However it happened, I knew as soon as I heard about the programme that I wanted my school to be a part of it.

Four free plays? At The Old Vic? And with an in-school workshop attached to each production? And did I mention ‘free’? Who wouldn’t want a piece of that? I applied, more in hope than expectation; and I got in.

I get to go to The Old Vic to see all these actors, directors, designers and their teams doing great work in a beautiful theatre; dragging along 30 indifferent school children is a small price to pay for such delights, right? Well, I’m not going to deny that I was thrilled to be able to see these plays myself, but genuinely, from the first, the biggest thrill of all was the idea of opening up the glories of high-end theatre to young people whose opportunities for access to work like this would otherwise be limited by their circumstances. It would be a challenge, I knew, as many of them would not have seen much, if any, theatre before and would not be used to going to places like The Old Vic, but that just gave it more of a sense of excitement and adventure. I quickly came to see The Old Vic Schools Club as a vital project for my students and our school.

That first season was a real eye-opener for me. As we set off for our first production, Hedda Gabler, I was in a state of some trepidation. Surely, I thought, my outer London inner city students would find nothing to connect with in this old, old, old Norwegian play about bored, repressed, middle-class, self-obsessed, self-indulgent strangers. Well, I should have had more faith in my students (and the play). They loved it, talked about it all the way home and couldn’t wait for the next trip.

This became something of a pattern for future trips – challenging productions accepted by my students with open minds, their imaginations greedy to engage with the work, always with something interesting to say about it even if they ‘didn’t like it’. I don’t want to paint an unrealistically glowing picture of our trips – there were always some students, and some times, when the connection was not made and they came away dissatisfied, confused or bored; but these were relatively few, and even these could be parlayed up into some interesting discussions around the whys and hows of their dissatisfaction.

As this first season progressed, so did my students’ engagement and enjoyment. One of the key expectations of membership of Schools Club is that you bring the same group of students to each of the four productions in each season. It seemed to me to be something of a disappointment that I couldn’t share the love more broadly than just the favoured 30. I pretty soon came to realise, though, that this limitation was in fact part of the unique joy of Schools Club. Over the course of the year of theatre-going with the same students, I saw them progress from being untutored innocents in the auditorium into brilliantly opinionated critics who could discuss the relative merits of a range of productions they had seen with a depth of sensitivity and understanding that I would not have expected from them at the beginning of the season.

In fact I realised that I had on my hands not just a group of children who went to the theatre, but a bunch of eloquent young people who were well on their way to being sophisticated theatre-goers. They were able, by the end of the fourth play, to go far beyond ‘I liked it’ or ‘I didn’t like it’ and to analyse the performances in detail whilst still hanging onto the core enjoyment of the plays. By the end of that first season, they had also seen more plays in one year than many of my staff room colleagues had seen in their entire lives.

Thrilled by the experience on my first Schools Club, I applied again for the next year. I didn’t get in. So I tried again the year after. Didn’t get in. Same again the next year. Eventually, though, I managed to worm my way back and I’ve now been blessed enough to have a run of a few years’ involvement and I’ve seen the same experience play out with each new cohort – more so, in fact, since we’ve now had the bonus of having students come to their first plays in year 9 and still be coming with us into year 11.

Let me say something more about the age breakdown of my students who come to Schools Club. I’ve always made Schools Club an open-access project, as far as the numbers allow. I’ve not targeted GCSE drama groups, though inevitably many of them have wanted to come. I’ve not restricted it to one year group, though the range and content of the plays mean that I’ve only really taken KS4 students. My groups have been a mix of years 9, 10 and 11, and one of the delights of the programme is to see these students from different years mixing together and sharing the experience of theatre-going. This very much reflects the pastoral ethos of our school, where we use vertical tutoring structures to break the relationship tyranny of fixed year-group association. It is delightful to see a student who came to her first Schools Club performance in year 9 reach year 11 with the group and pass on the baton of engagement to the next generation of year 9s coming up behind her.

The benefits of this age mix come through most clearly in the brilliant in-school workshops that accompany the plays. Highly-skilled facilitators, always younger, more dynamic and more beautiful than me, come into school to introduce the plays to the students, usually a day or two before the trip itself. These workshops cover a range of approaches to the plays – some can be text-based, to demystify the language for the students, others are thematic and explore the intellectual worlds of the play, others (and these have been some of the best) look at the technical language of the production, introducing students practically to staging types and design ideas.

In these workshops, given the nature of the groups, the students get to work closely with others whom they may not know well or at all and who will be in different year groups. The relationships forged in these sessions carry forward out of the room and develop as the year of plays and workshops progresses.

There’s so much more I could say about the benefits of Schools Club, but I’ve already gone on a long time. There are a few areas I don’t want to leave out, though, so just a few more words to come on programming, access and engagement and measurable impacts.

I’ve already said I like to have a mix of ages in my Schools Club group; but another avowed intention from the start has been to use the programme as a way to open out to groups in school who might otherwise miss out on opportunities because of their home circumstances. The programme is free, the plays are free; this means our most disadvantaged students can access the programme on the same footing as anyone else. Additionally, I have tried to open the programme out as far as possible to the ‘lost’ students in KS4 – those who no longer take any of the arts subjects on the curriculum as part of their GCSE choices. Up to a third of the Schools Club cohort have been ‘non-arts’ students, which I hope will encourage life-long engagement in the arts even in those students who no longer access the arts directly in school.

Schools Club takes no prisoners when it comes to programming. There is no watering-down of the play offer for the children, no condescending accommodation to their youthfulness and inexperience. The students are expected to come to the same plays in the season that the rest of the paying public would attend. If this means esoteric ruminations on modern art in ‘Art’, or full-frontal nudity and obscure language in King Lear, or an Arthur Miller double-bill, so be it. The joy of this is that it raises their game as consumers of culture and allows them to see themselves on an equal footing with the audience all around them. The Old Vic is not part of the culture from which our students can so easily be excluded, it is a place where the balance can begin to be redressed. Our students become like sleeper cells in the take-over of culture, seeding a change in audience demographics and moving the culture away from exclusivity. Hopefully, attending a season of Old Vic Schools Club performances is turning our students into life-long theatre-goers and changing the face of theatre audiences in the process.

Finally, outcomes. This wouldn’t be an education-based piece without some reference to measurable outcomes, and I can truly say that engagement in the Schools Club programme has had a significant impact on my GCSE drama students’ results. How could it not, given the nature of the work in GCSE and the standard of the work shown to them at The Old Vic? I have seen students come back from a Schools Club trip and blatantly steal a moment from the play to use in their own devised work. I have seen students choose scripts to perform in their exam because they have seen them performed at The Old Vic. I have seen the improvement in students’ critical language, evidenced through their review writing in exam conditions, simply because they have had so many discussions about theatre and plays because they have seen so many productions at The Old Vic.

These measurable outcomes are the ones the bosses like most, and help me get approval for more trips, and I love them myself since we are all judged by outcomes like these. But, if I’m honest, my favourite bit about Schools Club is that notion of us laying down sleeper cells of dynamic, young, culturally diverse theatre-goers who will change the nature of culture as they continue to produce it and consume it throughout their lives.

Thank you, Old Vic; it’s you who has done this.