Are we nearly there yet? A note from Matthew Warchus 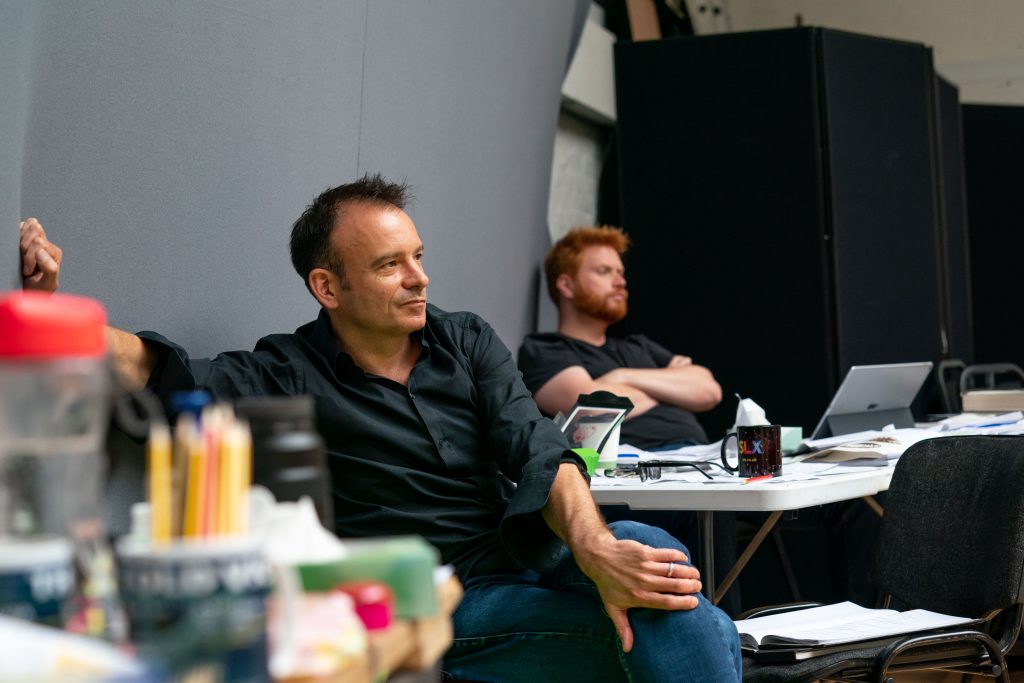 ‘Are we nearly there yet?’ is the recurring question that reliably punctuates every long family car journey, train ride and country walk – often asked just minutes after setting off. As mitigation most parents will resort to the spacing of treats along the way – ’emergency rations’ was how my mum and dad always announced the sporadic chocolate digestive.

When Lockdown began in March I think none of us predicted the length of the journey we’re now on. I remember many theatres saying they were closing for two to four weeks. I certainly was mentally bracing myself for an unimaginably long pause of six months through to September. I’m sure most of us spent the spring glued to news reports and government announcements with anxious expectation as two weeks turned into four, six, eight, twelve… ‘Are we nearly there yet?’

Here at The Old Vic we have been motivated to provide treats along the way in whatever form we can – ’emergency rations’ that boost morale, entertain and satisfy the human instinct for empathy in a concerted effort to continue theatre’s fundamental role of bringing people together in a shared experience even when physically impossible. And through our free content programme Your Old Vic and our OLD VIC: IN CAMERA series we have reached people all over the world.

The OLD VIC: IN CAMERA Zoomed plays streamed live from the empty Old Vic stage has proved extremely effective as a way of bringing a version of the live theatre experience to enthusiastic viewers around the world. It has also provided a modest but meaningful income for the performers and creatives and for the theatre itself which is fighting for its survival.

Thanks to a wonderful team effort, and to the adventurous spirit of the writers and actors involved, we have managed in the last three months to deliver three very memorable productions and I’m delighted to be announcing A Christmas Carol as the next offering. It has been such a moving thing to witness how so many people have rallied around to support The Old Vic, and theatre in general, at this time of serious jeopardy, and back in May I received an extraordinary email from a well-known actor offering to help in any way he could and expressing a long-standing wish to play Scrooge. Although at the time our conversations revolved around bringing back a live audience in time for Christmas, that clearly is no longer possible, and I’m incredibly grateful to him and to everyone for willingly agreeing to change tack and join us in reconfiguring this much loved production into an OLD VIC: IN CAMERA event. I’m excited to tell the story in this new format, with the powerful addition of close-ups, and hope it will provide much needed sustenance for audiences (a mince pie or a satsuma if not a chocolate digestive) on this gruelling journey. We will be announcing full casting very soon.

My favourite platitude in life, without question, is ‘This too shall pass’. It’s so reliably true. With necessary continuing intervention by the government plus the exceptional support of our donors, our corporate partners and our ticket-buying audience, I am more confident than not that The Old Vic and the UK theatre ecosystem as a whole will somehow claw its way back to its full glory in the foreseeable future. The return of live performance is clearly going to be one of the last stations on the journey but as the neon sign outside our 202-year-old building defiantly reassures, ‘We’ll Be Back’. In the meantime we are extremely grateful for the passionate and crucial support which is sustaining us month to month and we are committed, in return, to delivering a steady stream of new OLD VIC: IN CAMERA productions beyond A Christmas Carol and up until our reopening.