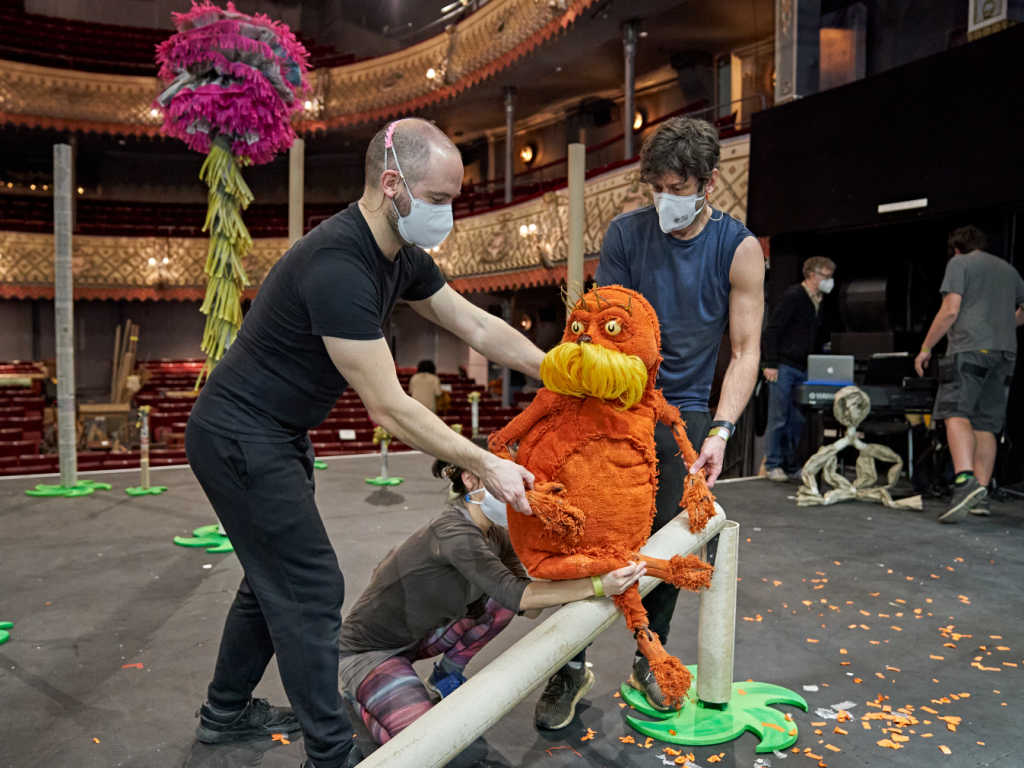 The Puppetry Director and Puppetry Co-Designer of Dr. Seuss’s The Lorax, Finn Caldwell, tells us what it takes to design puppets and bring them to life.

HOW AND WHY DID YOU GET INTO PUPPETRY?

I guess I came to discover and fall in love with puppetry quite late in my career. I originally trained as an actor and I was lucky enough after I graduated to sort of walk into a jobbing theatre-actor career. It was mainly classical texts that I did, and after about five years I realised that I was really missing the visual side of things. So, I started studying mask and puppetry and puppetry just seemed to click for me. I worked with several puppet companies and then I guess one of the big leaps forward was, of course, War Horse. I was in War Horse and then directed the puppetry for many years and that was sort of like an MA for me, like a doctorate. I discovered in depth what makes puppetry work and how audiences respond to it. I love the idea that the visual can carry the narrative and that visual can also tell you about character.

DID YOU DESIGN ALL THE PUPPETS? HOW MANY ARE THERE?

Nick Barnes and I co-designed the puppets. Nick and I have worked on lots of projects and it was a really interesting process, I loved it.

In this production there’s The Lorax puppet and then the fish or birds are a mixture of found objects, as if they have been found in a desolate rubbishy landscape. We’re also experimenting with a miniature foley box in which things are sort of tiny versions of themselves and when filmed they look bigger on screen. So it’s all up for grabs. We’ll have to wait and see at the end of the rehearsal process how many puppets end up in the show! 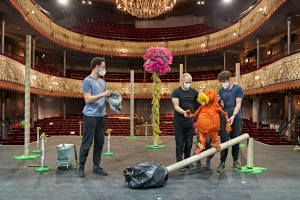 HOW LONG DOES IT TAKE TO MAKE THE PUPPETS, WHAT MATERIALS DO YOU USE?

When I’m working on a show with puppets we always have some level of research and development process, which is a two-stage process. First of building prototypes of the puppets and then of testing those prototypes with experienced performer-puppeteers. That initial prototype stage might take a couple of weeks and then building the puppets, depending on what they are, can take several months. In terms of materials – everything and anything really. It is always interesting trying new materials and trying to respond to the aesthetic of the show. The Lorax puppet is made internally of wood and metal with bungee joints and then he has got foam shapes and foam padding inside him. His face is sculpted clay and then cast and filled with a kind of hard foam. He’s got lots of different moving parts including the mechanism for the moustache, which is a complicated thing in his head.

HOW DO YOU TRAIN PEOPLE TO OPERATE THE PUPPETS?

There’s two major things you need to think about when you’re asking people to operate puppets. First of all how to operate the puppet, like how you drive a car. That is quite technical and takes a long time and can be very physically demanding. Then there’s the other side which is – how do you make this thing specific, personal, have intention, have emotion? So with a naturalistic animal, like a tiger or a horse or a dog, you might research the type of animal it is and really find out how that thing moves. How specifically that type of dog moves. But with The Lorax it was more about looking at the Dr. Seuss book and looking at his personality and how he interacts, how he stands, how he moves and how to develop his character.

ARE THE PUPPER OPERATORS ACTORS OR SPECIFICALLY PUPPETEERS?

A mix basically. Quite often it’s useful to find people who have been trained in acting who have an understanding of physical discipline. One of the great things is that somebody who really understands acting has the ability to carry the narrative of a puppet character through a show. The people operating the feet and the back have to really be sensitive to what the head is thinking and feeling and make the action seem like it’s fluid between the three of them.

DO THE PUPPETEERS ALSO DO THE VOICES OF THE PUPPETS? 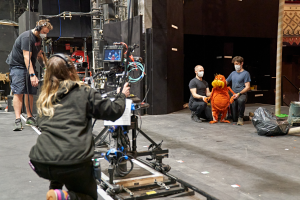 IS IT DIFFICULT TO WORK WITH ANOTHER PERSON TO CONTROL A PUPPET?

One of my favourite things about multiple person operated puppets is learning to work with the rest of the team, whether it be two or five of you to become in sync with each other. The aim is to sort of let go of your own ego and your own decision-making process and become part of that team so that it seems seamless who is making decisions at any one moment. So the head might choose to look at something and in the head puppeteer’s mind they might think ‘oh I’m really scared of that thing’ but what the foot puppeteer might understand from the way the puppet responds is that they’re actually interested and so they might take a couple of steps forward. Hopefully if the rest of the team are in sync enough they’ll just go with that action as well so the leadership of the character of the puppet sometimes is more often led by the head, but in an ideal situation be able to accept offers from any part of the body and it should seem like it’s one being making its own choices.

WHAT ARE SOME OF THE CHALLEGES WITH PUPPETRY?

In this production The Lorax is smaller than a human being and to make him fully articulate you need three people around him to give him full expression. Somebody needs to hold the head and the back, somebody’s holding two hands and somebody’s holding two legs, so that’s three pair of hands. For something fully articulated you want three people, but because there’s three full-size humans standing around this puppet which is half the size of a human there’s a danger of him looking like he’s being crowded in on. So we did spend quite a lot of time in the choreography and in the puppetry training and even in the lighting and the costume trying to draw the audience’s eye away from the puppeteers and to the puppet himself.

WHAT IS YOUR FAVOURITE PART OF THE SHOW?

Oh gosh I do not know! Maybe when we see The Lorax for the first time when he bursts out the stump of the tree. It’s so joyous and a bit mad – we’ve sort of set up this zany world where The Once-ler has got these dreams and ambitions and is off on this adventure but when The Lorax pops up for the first time you really know that you’re in a mad, mad world with wonderful magical creatures. And if you believe that the puppet is alive, which hopefully most of the audience do, then you’re accepting that there is a magical creature actually live there in front of you and that can be a really extraordinary experience because it transports you to a magical place.

WHAT’S THE ONE THING YOU WISH PEOPLE KNEW ABOUT PUPPETRY?

That it’s easy to start. Almost anybody within a couple of hours can start to make something look alive and it’s a really exciting process and exercise and imagination and everyone should have a go at it. It gets harder after that but it’d be great for people to know that there’s no big magical secret you just start and get going and keep trying things. Also one of the best things that puppets do is character and emotion. Quite often people think of them when they want a special effect but more and more I think a puppet as a central character is a really exciting proposition for the audience.

HOW DO YOU DESCRIBE THE PLAY IN THREE WORDS?

Dr. Seuss’s The Lorax is live streamed from The Old Vic stage from 14–17 April.