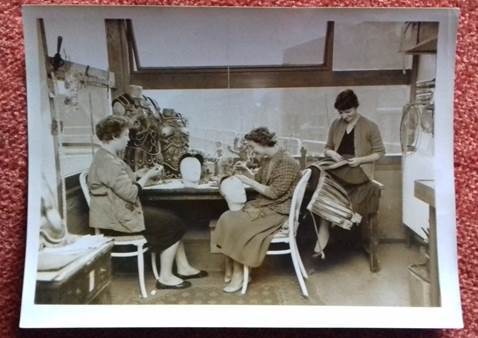 For 25 years my theatre life centred around The Old Vic, in Waterloo Road.

As a school girl, growing up in Croydon in the 1940s, I had read a lot about The Old Vic in biographies of actors like Sybil Thorndike, John Gielgud, Laurence Olivier and Edith Evans, who had all performed there. I longed to visit The Old Vic but then, in 1941, the theatre was hit by a bomb and boarded up. I found out that Patrick Ide, an administrator at the theatre, was taking small parties on a tour to raise money, so, in 1944, I booked on one. The roof had been temporarily replaced and the bomb blast had damaged the balconies and the stalls. That same year, an Old Vic Company led by Laurence Olivier, Ralph Richardson and John Burrell was formed. They set up a temporary home at the New Theatre in St. Martin’s Lane, now the Noel Coward Theatre. I was thrilled and for the five years that the company existed saw every production.

The Old Vic had been restored in preparation for the Festival of Britain in 1951 and it reopened on 14 November 1950. I queued from 4am for a ticket! Having last seen the interior bomb damaged, that evening, going up the stairs to the balcony, I had forgotten just what to expect. On entering the auditorium I was overwhelmed by the glorious creamy grey, gold and crimson décor and elegant horseshoe shape of the balconies. It was the most beautiful sight I seen for a long time and quite took my breath away. The London theatres that had escaped the bombing were mostly in need of renovation and repair; The Old Vic was so different and had such a special atmosphere. Edith Evans had flown in from New York to speak a special Prologue written by Christopher Hassall. It was a lovely lyrical and humorous speech; I still have the copy of it that was given out on the evening with the programme. The opening production was Twelfth Night with Peggy Ashcroft (Viola) and Paul Rogers (Malvolio); it was the beginning of a really varied season with a brilliant company.

I was determined to work at The Old Vic one day. I completed the one-year technical course at Bristol Old Vic Theatre School in the company of some particularly talented acting students including Annette Crosbie, Patricia Routledge and Peter Baldwin. After various theatre jobs, I became Assistant Catering Manageress at The Old Vic in 1955. At that time, The Old Vic was working through the five-year Folio Plan, performing all the plays in Shakespeare’s First Folio. A year later, at the recommendation of Derek West, a fellow technical student from Bristol, I was offered a job by the Wardrobe Manager, Dinah Greet. Derek was running the Costume Accessorises Department and he taught me how to make costume decoration, jewellery, crowns and headdresses, chains of office, scabbards and sword belts, and, amazingly, armour. When Derek left to go freelance I became the Armourer in The Old Vic wardrobe, with my name on the programme to prove it!

The Wardrobe department was housed in a tall Georgian house in Betterton Street, at the Holborn end of Drury Lane, with the office, stock rooms and paint rooms on the ground floor; lady’s costumes (cutters’ room, workroom and fitting room) on the first floor; and men’s costumes on the second floor. On the third floor, ‘Character’ costumes were made in two rooms and the Costume Accessories department occupied two further rooms. While working on costume pieces our tables would be covered with piles of braids, leather, wire, cord paper; boxes of beads, artificial pearls and gemstones; pins, reels of cotton, and needles of all sizes; endless tubes of glue; pliers, scissors, a Stanley knife, a hammer and rivets.

We didn’t have plastic, fibre glass or metallic ‘plating’ then, so we created realistic looking stage armour using underlay felt, size (a stiffening substance that penetrated the surface of the felt) and 3 or 4 layers of carpenter’s glue. The surface was then painted with enamel varnish or covered with leather. Today a vast amount of decorative materials are available; in the 1950s, we used liquid rubber latex that we set in plaster moulds to make solid rubber shapes that could be stuck onto a piece of armour and painted to produce embellishments such as heraldic symbols. We worked from a designer’s own drawings and used pictures of historic armour as reference. When we were making armour, visitors, who could bear the smell of the disgusting saucepan of size on the hotplate, had to step carefully through the bewildering ‘chaos’, avoiding the electric glue pot and pieces of drying armour spread around the rooms.

In 1958, the Wardrobe, along with the other production departments, moved into a purpose-built building next door to The Old Vic and known simply as ‘The Annexe’. Our department was again on the top floor but there was a lift. We had three rooms and a flat roof area where we could sit and work in good weather. This also provided a useful, well-ventilated drying space. The Queen officially opened The Annexe on 18 March and attended a special performance to which staff were invited. The photo shows me with Connie Olden (left) and Susan Holland (right), working in The Annexe, November 1958.

With the Folio plan completed, The Old Vic began a varied programme of plays; the 1959-60 season included George Bernard Shaw’s Saint Joan designed by Leslie Hurry. Making his armour was a really creative exercise; simple basic shapes had elaborate defining edging and detailed decorations. Leslie’s armour was never painted a plain colour, but colours were blended to give depth and glow. Barbara Jefford played Joan and the Fleur-de-Lis on her breast plate are an example of painted shapes formed from liquid rubber latex. 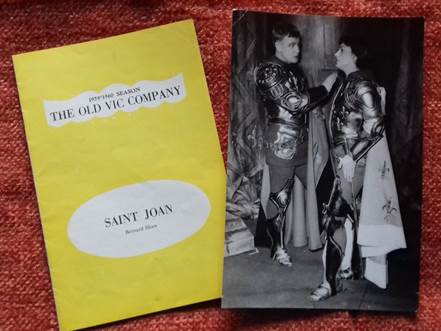 During the 1960-61 season, the most exciting work for me was Romeo and Juliet, with John Stride and Judi Dench, directed by Franco Zeffirelli. He also designed the scenery for the production. He was the only director (while I was there) who took any interest in the Wardrobe and every day when rehearsals finished he’d come to visit us to see how our work was progressing. Peter J Hall’s costume design for Juliet’s spectacular ball gown consisted of elegant squiggles and I was decorating the panel on the bodice which Peter wanted to be elaborately adorned with pretty braids, cabochons and gem stones. One day, Zeffirelli brought me some small, softly coloured pebbles he’d picked up in the courtyard of ‘Juliet’s house’ in Verona and asked me to use them on Juliet’s dress, if I could. I made soft leather settings for the pebbles and incorporated them into the decoration on the bodice. I am still proud to have worked with Zeffirelli on his introduction to The Old Vic and London theatre. Judi Dench and John Stride were perfect as the lovers and the production received brilliant reviews; it wasn’t simply the acting or the beautiful pictorial scenery and costumes, the production was a complete artistic entity. 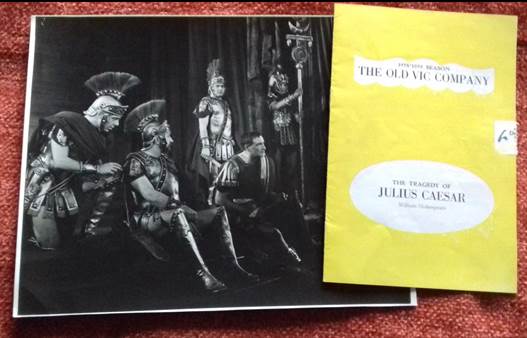 In the first season Olivier had the small part of ‘Captain Brazen’ in The Recruiting Officer. It was exactly the sort of cameo he excelled in creating and wearing a highly exaggerated uniform and a very large hat, with make-up and nose to match, he looked spectacular! I’d been involved in the making of sword-belts, baldricks and holders. During a dress rehearsal, I was going through the auditorium to backstage when the pass door opened and there was Captain Brazen, larger than life, holding the door for me. As I walked through, Olivier gave me a smile and a bow!

Towards the end of 1965, the National Theatre Company took over The Old Vic in its entirety and very shortly after the opening of the new season my department was given notice. Although my time working at The Old Vic ended, I had achieved my ambition of being part of this unique theatre. Now, 50 years later, looking at production photographs of some of the finest actors at the time wearing armour and jewellery I had made and costumes I had decorated, is an almost surreal experience, but one that gives me real satisfaction and pleasure, increased by knowing that The Old Vic is still flourishing in the Waterloo Road.