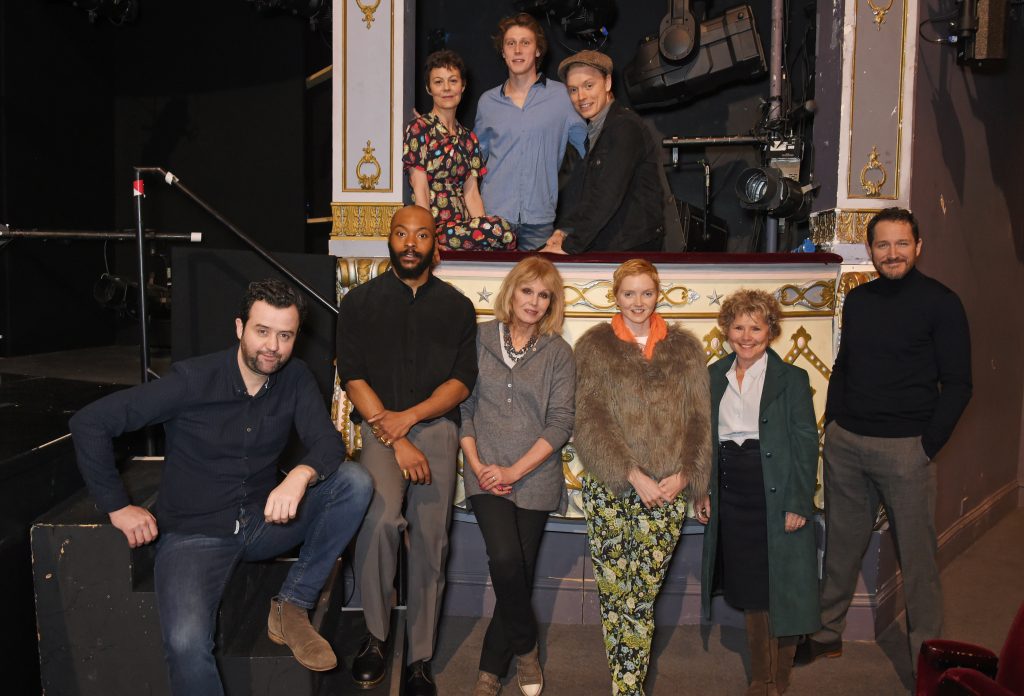 As the countdown to our 200th birthday continues, we’re proud to announce our Bicentenary Ambassadors – friends from stage and screen who will lend their support to this momentous occasion by celebrating the past, present and future of our beloved theatre.

The Bicentenary Ambassadors will variously curate monologues, appear on stage, share their reflections on the theatre, attend special events around the birthday itself and throughout the year, and help to raise awareness of the education and community programmes that serve 10,000 young people each year.

Confirmed highlights include Maxine Peake curating a series of monologues called One Hand Tied Behind Us to mark International Women’s Day and the 100th anniversary of the Representation of the People Act of 1918; actor Bertie Carvel running the London Marathon to raise much needed funds; Helen McCrory conducting an acting workshop for budding actors or actresses; as well as Ambassadors such as Judi Dench, Ralph Fiennes, Glenda Jackson, David Haig, Jane Horrocks, Tim Key, Joshua McGuire, Rhys Ifans, Daniel Radcliffe and Rufus Sewell sharing birthday messages to the theatre that will be released during the week of the birthday in May.

Following his appointment in September 2015, Artistic Director Matthew Warchus has redefined The Old Vic for today as a beacon of entertaining, provoking, uplifting art with the introduction of eclectic seasons of a wide range of work that to-date have welcomed more people through the doors than ever before.

The Old Vic, originally named the Royal Coburg, first opened its doors in 1818 and over the last two centuries has played host to opera, dance, cinema, music hall, classical dramas, variety, clowns, big spectacles and novelty acts. It was the original home of the English National Opera, the Sadler’s Wells dance company and the National Theatre. It has also been a tavern, a college, a coffee house, a lecture hall and a meeting place. The theatre is unique. It stands alone, an independent charity producing groundbreaking work, with no public subsidy, and a social mission running through all it does on and off stage. The adventurous spirit that has permeated every chapter of its history remains as strong today, 200 years on, as it was in 1818.

Artistic Director Matthew Warchus said ‘I’m determined that the celebrations to mark this milestone shouldn’t be about eulogising a historic artefact. For me, it’s essential to recognise that the illustrious history of this building is also characterised by mischief, populism, sometimes breathtaking boldness and risk. Above all, it’s been a place full of youthful vitality and an urge to reinvent itself to stay relevant and always engaged with the world around it. The Old Vic is important not just because of what it’s been but because of what it can be – now and in the future.’

Quotes from some of the Bicentenary Ambassadors

‘Performing in Girl from the North Country was my first experience working at The Old Vic and it was a pleasure.  It’s one of the most welcoming and passionate teams I’ve worked with and the dedication to the building and to theatre is clear from the moment you walk in. The Old Vic is truly pushing for innovation and it’s great to know that a theatre is willing to take a chance on a piece like Girl from the North Country. Among other qualities, the show achieves a freshness and a bold unorthodoxy. I know The Old Vic will continue to champion both shows and performers who do the same.’

‘The Old Vic is my favourite theatre. It’s romantic because it’s old with a great history and it’s exciting because it doesn’t stick to one kind of play. It can embrace anything you care to put on its boards.’

‘Standing proud on the Waterloo Road for two centuries, The Old Vic has seen it all down the generations. It’s a remarkable place, steeped in theatrical history but constantly evolving and innovating, throwing its arms wider and wider as it embraces new audiences and new forms of theatre. I’m very proud to be one of the voices that has spoken from its stage, which is why I’m piping up again now, not only to say Happy 200th Birthday, you saucy stripling you, but also to yell that together in this landmark year, we who love and value this great building are on a mission to secure its financial future, so that those who create theatre in it tomorrow can surprise and challenge and entertain our grandchildren’s grandchildren. I hope you’ll join us.’

‘Every theatre has its own magic…but The Old Vic, for me, has always had a special alchemy…You feel the ghosts of actors and audiences of the past willing you on, as you venture onto that stage…They’re there in the wings, in the flies, in the auditorium…Then and Now, the Living and the Dead fused somehow…Which is really the tradition of the theatre. It is a special place. A jewel in the crown of London’s theatre land.’

‘The Old Vic, to me, represents family and heart. I feel a part of something much bigger than that projects that have brought me to its stage. It is a building crammed full of open, generous, supportive creativity and genius. I am filled with warmth and pride to be a part of its illustrious and ever growing family tree.’

‘I think The Old Vic has a reputation that is immutable. It’s a lovely theatre to be in; it’s a lovely theatre to play in. It has, undoubtedly, a well-earned magic which has nothing to do exclusively with longevity. Looking at The Old Vic, not only because of its past but what it’s done in the recent past and what Matthew is doing with it now and in the future, that idea of attracting people who would not automatically think of going to the theatre, shows a vital energy resource. Because there isn’t going to be any theatre in the future if we don’t create the desire to go; if we don’t allow people to understand that it can be a unique experience. When it works, there’s nowhere else like it in the world.’

‘Working at The Old Vic has been enlightening. There is no mystery as to why this theatre puts on such great work: It is because of the support and encouragement they give to their creatives, right from the inception of a project. Occasionally, as an actor, you can be made to feel like a gun for hire, but at The Old Vic they really value their performers. On Girl from the North Country we were always an important and central part of the process.’

‘The Old Vic is the real thing. One of the fathers of British theatre and for me – ever since Richard Burton punched the walls as Hamlet and some of the masonry fell off and the audience screamed like he was a Beatle – it’s been part of the real heartbeat of the best theatre in the world…Get down there and see a new play, a funny play, a classic, a musical…’

‘Performing Waiting for Godot on The Old Vic stage with my great colleague Alan Howard, directed by that mentor to us all, Peter Hall, remains an indelible, treasured experience. May The Old Vic be forever young.’

‘The Old Vic was a landmark theatre long before I arrived at its doors, fresh faced, in 1974 to appear in the National Theatre production of the Beaumarchais play of The Marriage of Figaro directed by Jonathan Miller. I learned first-hand about being in a company. The bustle of the building was magnetic, from the political, gossipy conversations to be picked up in the basement canteen, to the rehearsals I observed in the top floor rehearsal room. I loved it. Thankfully this bastion of London theatre is still here, but will continue to need support to maintain its crucial youth programme and remain one of the most creative, inclusive, prestigious and beautiful theatres in London.’

‘My experience of working at The Old Vic remains one of my absolute theatre highlights to date. It fuses the history and majesty of the place with exciting, fresh and dynamic productions for a modern day audience. I remember walking out onto the stage for the first time and looking out at the auditorium. Its scale and beauty hit me right between the eyes. ‘Imagine performing Aston’s monologue from The Caretaker in this setting’ I thought? It surpassed all my expectations. The theatre’s capacity to generate intimacy with the audience is quite extraordinary. I relished every performance.’

‘Of all the London theatres The Old Vic is closest to my heart. It seemed ageless when I started going there, and now I’m chastened to think that I have been seeing plays at The Old Vic for more than a quarter of its life, and three-quarters of mine.’

‘The Old Vic has always excited me, partly, I admit, because of the legendary actors who have trodden its boards, and the tales of its unstuffy founder Lilian Baylis frying up her breakfast in the box during rehearsals, but also because it has always attracted innovators and seems to metamorphose to fit the shape of the times. When I get off the train at Waterloo and walk towards that unique building lit up like a birthday cake, I feel it welcomes everyone, and under Matthew Warchus in particular it is determined to do just that.’

‘I spent a year at The Old Vic in the only rep company I’ve been able to join. I played a hippy, a Victorian housewife and Konstantin in The Seagull for Peter Hall. It was one of my first jobs after drama school and as soon as I walked into that wonderful rehearsal room, with Olivier’s chair over by the window, I felt a part of a long tradition of liberty and mischief. A sense of subversion in a hallowed place. We had a ball.’

See the full list of The Old Vic's Bicentenary Ambassadors