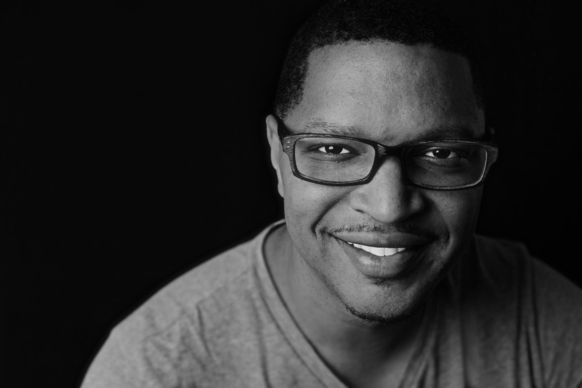 Rachel Chavkin’s production of The American Clock will fuse 1920s swing and jazz with a fiercely contemporary sound – we caught up with the man behind the music to learn more about the the ground-breaking show which is playing here at The Old Vic from 04 Feb – 30 Mar 2019.

What made you want to become a composer?

My grandparents had an organ in their house and as a little kid of four years old, I was allowed to press the keys sometimes and create…ummmm…noise. Eventually my parents got a piano and everyday I just played the instrument. I wanted to know all of the sounds that the piano could make. Initially I was not interested in learning to read music; I just wanted to make ‘noise’. Some of my early compositions come from me playing the piano to cartoons with the volume down. My early compositions/story telling was basically comprised of either happy or sad sounding chords or four to five note melodies.

How will you be bringing 1930s America to South London?

Hopefully we will be bringing South London to 1930s America.

Where did your initial inspiration come from for the music of The American Clock?

A lot came out of the conversations that Rachel, Darron and I had in the early days of this development. We talked a lot about how music was used when the country/world was spiralling in a scary direction. The music made difficult times a bit more palatable and even distracted from the harsh realities of the time. Some of the happiest and most upbeat music was written during the Great Depression. Songs like ‘We’re In The Money’ served as a pacifier and offered hope to people that maybe we all can be ‘in the money’. The music of the period was inspiration enough.

What is your favourite aspect of composing?

My favourite aspect is the story telling aspect of composing. The idea that a set of notes can dictate a mood is still fascinating and magical to me

What is your process?

If I am working on a period piece, it is important for me to immerse myself in the music, art and cultural of the time. I want to feel like a contemporary to other composers of the given time period. After I feel like I have a good understanding of the period I will begin to compose.

I go to my studio, sit at my keyboard, press record and start playing my piano, freely with all of the harmonic information that I have absorbed from the period. My attempt is to play and not plan my next harmonic or melodic move. The moment I start to plan I will press stop on the recorder and begin building on the music that came to me in the moment.

Which American food do you wish we had in the UK?

I don’t eat as much meat as I once did but Texas BBQ is a treat! A good slow cooked, moist brisket is an amazing thing that the non vegan/vegetarian world should experience!

What has been the most memorable moment in your career?

I have had a lot of memorable moments but one that stands out was in fact a huge learning moment. I was in Los Angeles for the first time and playing keys for an award show after party. I had never been to L.A. before and I was playing piano with a band that I had toured with extensively, so we had a great connection. I’m playing and we are locked in on a groove, the party is lively and full of A list celebrities and then Stevie Wonder walks in and literally stands about three feet from the stage. From the moment I noticed Stevie in the room, and him grooving to the music, I lost my connection to the band and began to play for him. It was terrible because I stopped being an artist and turned into a piano player for Stevie Wonder only.  I have since worked with and shared space with some of the most celebrated artist on the planet and while I am often still a fan of their work I had to realize that we are peers and no one person is more important than another in the grand scheme.

Finally, how would you describe the script of The American Clock in three words?

Tickets for The American Clock are on sale now.